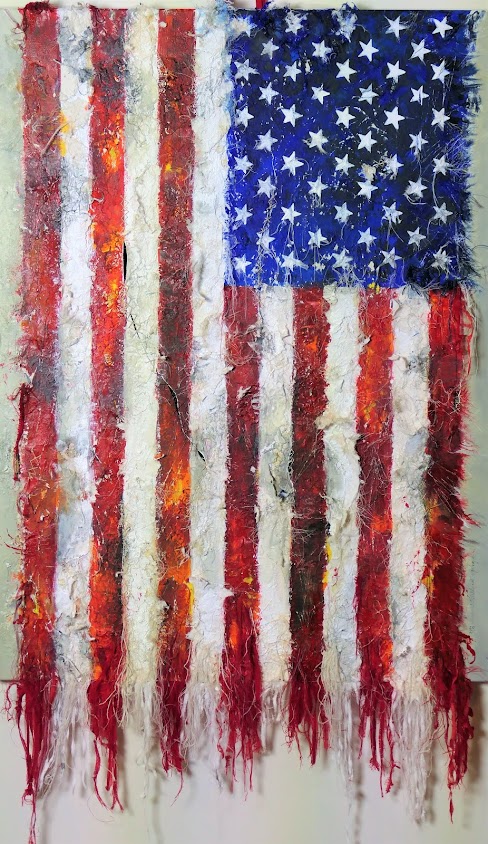 In the wee hours of January 6, 2021, about 4 AM to be exact. I felt compelled to create a flag and call it “still here”. Though I resisted the idea at first …by 8am I was in full swing of scaling up the flag on canvas, laying down paper, etc….with TV on in the background listening to the news. By whatever time of the day I learned about the insurrection I understood…. 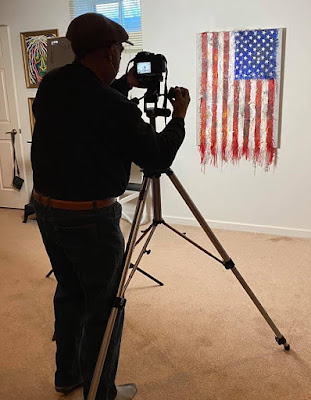 This work is acrylic on canvas and handmade paper with textiles all mangled together beaten, cut, stitched, broken — just to make that point [we are] “Still Here"

However, just because democracy held up this time, doesn't mean it will next time. I have decided that my/our liberties and all the rights we enjoy in the US have to become 'responsible freedoms' if we are to survive and thrive again. And we are all accountable. We must do whatever we can to protect this democracy... As imperfect and dysfunctional as it is at times, it is still far better than alternative governments.

The images shown above are, 1) “Still Here” Mixed media acrylic/collage / handmade paper on canvas. 42" x 30" 2) Bill May photographing the flag in his studio, Millville, New Jersey.
You can see this art and the rest of my work and those of 30 other African-American artists via the link below until October 2021: INTO THE LIGHT
https://artintheatrium.org/search?q=Rosalind+Nzinga+
#rosalindnzinganichol #mixedmedia #handmadepaper #papermaker #mixedmediapainting #africanamericanart #africanamericanartists #diaspora
https://www.facebook.com/ArtintheAtrium
#intothelight2021
No comments:

Since the death of George Floyd in May of 2020, it seems daily we hear of another new or older case in which an African American has died from a suspicious altercation with the police... I completed the art shown here earlier this year called Why Are Her Seeds Falling to Earth, though it was started 2017, with no way of knowing how explosive this year would become.

The composition is based on the number of African Americans killed by or who died in the custody of police under suspicious or unjustified circumstances, primarily between 2014 and 2018. (I did not pick these years arbitrarily. I just noted that after Barak Obama became the first African American President in United States history, the cases of police brutality seemed to significantly increase).

In the composition, seeds fall down from a mother/sunlike figurehead at the top to fill up the earth along the bottom. As the seeds fall, they transform into the names and ages of over 100 people whose stories I have been collecting.

At first, I gathered these names out of frustration. Because, as writer/director Lena Waithe noted in an interview for her 2019 movie Queen and Slim. "Each time life was senselessly taken I [too] was feeling like a piece of me was dying with them. Somehow collecting their names helped me process my anger.

I originally recorded names and a few details in a document just to keep track. Then I realized that, like a lot of history about ordinary people, the names of most of these people would eventually be forgotten over time. That’s when I decided that if I created artwork incorporating the names, they would at least be preserved in a more lasting format. From the youngest, Tamir E. Rice age 12, to the oldest, Felix Kumi age 61, (at the time of this posting), and all the souls in between, I wanted this work acknowledges and celebrates each life as it asks the viewer to consider WHY? it keeps happening...

Then a few days ago I awoke to the story of Elijah McClain, a 23-year-old black man from Aurora, Colorado. Who died in the summer of 2019 after being detained by police and injected with ketamine by first responders - to calm him down. WHAT!!! I lost it. Something in me shook!!! How many more of these stories will we have to hear?!! Lord!!

Then an astonishing thing happened. I remembered... a night as a teenage girl when I was walking home late and alone after some party. A dark car filled with men sped up to the curb beside me. They jumped out and one of them grabbed me. Terrified, I immediately fought back. Only after I struck him did he present a badge and identify himself as an undercover police officer. He said that they had been informed a prostitute they were looking for was spotted walking in the vicinity. Even though it turned out I wasn't her. I was arrested and taken to jail for assaulting a policeman.


Too ashamed to call my parents, I used my one call to contact a girlfriend. Her father answered the phone, said "she's asleep!" and hung up. So I spent a pretty horrible night in jail the details of which are not important to this story. Just trust me. They were nasty, humiliating, and threatening, as I shared a cell with two other women.

All my efforts to cover my shame didn't work anyway. Momma saw my name in the arrest log the next day as she read the morning paper, trying to figure out what happened to me in the days before cell phones. I was totally humiliated, but never so relieved to see her in my life. The thickness of my shame hung over me for weeks until finally on the day of my hearing, the office did not even bother to show up and the charges were dismissed...

This is the first time I have thought about the incident in decades. It's been buried back there in the past I chalked up to experience. Hearing about what happened to Elijah McClain, brought the memories flooding back in a wave so surprising it shocked me. I was just WALKING WHILE BLACK! I was certainly no angel back then, but I was not a prostitute either!

My point in sharing this is to make note of how quickly things can escalate from something innocent - like walking home from a party unattended. That was my real shame. I knew I was wrong to be out that late by myself! My girlfriend had deserted me for some guy, and I was left with no choice but to get home the best way I could with no money. Momma's going to kill me! That was all I could think about as I walked.

---
Unless you are black, you can never really imagine how HARD most African Americans work to make sure whites are comfortable around us. It is a second nature conditioning almost part of our DNA after hundreds of years of conditioning!! W.E.B. DuBois calls it a "double consciousness." An inward “twoness” putatively experienced by African-Americans because of our racialized oppression and disvaluation in a white-dominated society.

The effect is that the burden of proof always seems to be with us. We have to prove ourselves worthy enough, responsible enough, reliable enough, smart enough, organized enough... the "enoughs" go on endlessly! When in fact the deck is always not so secretly stacked against us -- we all know this -- black and white. I venture to say this is as American as apple pie. Does that shock you? If it does and you were born in this country, then you have been living in some sort of denial.

Thankfully for me at least, all the officers who stopped me that night were black. In today's environment, that might account for why I am alive to tell my story. Annoyed and frustrated as they were by my youthful belligerence and combative behavior and whatever else those men thought about me. They still saw ME, as a young black teenager - a sister maybe, a daughter or cousin or niece. Someone who probably needed her butt beat for being out alone like that. But still, they saw themselves in ME. Taking me to jail was most likely their way of teaching me a lesson.

African American humanity is the very thing many white officers don't seem to see. With the same hundreds of years of conditioning, black skin has been weaponized, so that they only see us as the "other." A threat, someone who is not to be trusted or given the benefit of the doubt. The whole idea of the false "race" construct that says black people are something less than... The 3/5 of a human being myth is either consciously or unconsciously always present.

"We know that this is so, or they would not keep killing black people fully retrained or running away from them. When we continue to see footage on the internet of white officers spending 30 minutes in a McDonald's with a combative white man fighting and kicking at them without even being tased, or seeing a white officer standing baffled as an older white woman gets in her car and drives away refusing to be arrested. Or, perhaps the sickest story of all, learning of white officers going to Burger King to buy a man food because he was hungry after he just murdered nine innocent black people in a church."

Yes. I did say sick. There is an underlining sickness to racism and prejudice that is not rational and certainly not fair. All the sensitivity training in the world is not going to change anything until America acknowledges this sickness for what it is and seeks legitimate ways, without excuse or caveat, to make citizenship in this country equal for all.

There are social ills in the black community that only we can change. I am not ignoring that or giving us a pass. Just as there is work within the "white is right" construct that only white people can change. So let's just get at it.

In the meantime. Can we just hold every officer accountable for killing black people without just cause? Can we just create a database of racist cops, so they can't go down the road and get another job in another town? Can we keep the conversations and legislations moving that has been started and not turn 'this time' into just another momentary fad or knee jerk reaction?

The only path to healing is now that the bandaid has been ripped off is to keep it off. So we can look at all the ugliness of our sick societal norms and work together to foster real change. It has been done in the past. We have moved the compass forward before. We must keep pushing. We have enough enemies without to keep fighting each other within...

I am in the process of working on additional art around this dialogue. For now, the above art can be seen at the Art In The Atrium Exhibition in Morristown, New Jersey until August 2020 by special events:

You can also click HERE to see the show online.

The Justice in Policing Act: https://www.congress.gov/bill/116th-congress/house-bill/7120

need to translate this Blog?